Showing posts from June, 2019
Show all

The Life and Legacy of Volcanologist David A. Johnston: Setting the Record Straight 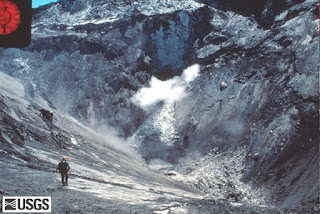 - Dr. Janine Krippner
People around the world know that David Johnston was a volcanologist at Mount St. Helens in 1980, and that he was killed when the volcano erupted. His last words are repeated over and over. His last photo shared all over the internet. What isn't widely discussed is who he really was as a person. Author Melanie Holmes has dedicated the last four years to talking to his friends, colleagues, and family. Her journey began as a result of a conversation between friends—Melanie has known Dave’s sister more than three decades. Since she began, Melanie has read reams of clippings and letters that his parents kept, as well as Dave’s teenage diary. And she spoke to those of us who carry on his scientific legacy today. It is time that his story is told, 39 years later, to clear up misconceptions and to fill in the gaps about who he was – a genuinely nice guy.
“As a man, Dave left his mark on the world through his work in the field of geology. More important, and this is…
Read more
More posts